RGA Winter Bulletin: Influencing Others - What Gets in Your Way? 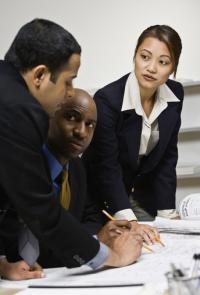 "Influence" is often considered a bad word, and

Beliefs about the act of influencing  discourage people from developing it as a skill.

"You many want to think about calling the workshop something other than 'influence.'"

"It sounds suspect like you're going to teach people how to manipulate me."

We believe influence can be a positive and productive activity that is necessary in today's work environment.  RGA defines influence as the ability to get things done through and with others without force or exercise of authority, essentially a collaborative approach.   As companies push decision making down and rely on cross-functional project teams to execute its objectives, all members in an organization will likely need to enlist others to get work done.  By reframing influence as a values-centered activity to achieve important objectives, people can learn to get work done in ways that encourage co-operation rather than manipulation.  This means exerting influence that is transparent in intent, respectful of others' interests, and focused on meeting critical goals.  In our workshops we teach participants how to develop this stance to working with members throughout the work context.

Here's the second trend we noticed during our conversations with clients.  When describing what it took to be an effective influencer, people provided a wide range of definitions.  "Bottom line, you really have to be good at sales," one person said.  "And I dont have it."   Lacking this "it" factor - the ability to sell - this person assumes her success at influencing will less than optimal.  Here are a few other things we heard: