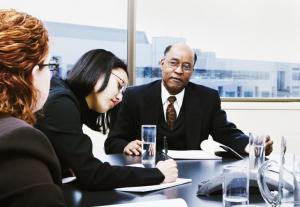 "I can't get my team to engage, people are
going through the motions."

"We are caught in endless debate. Everyone believes
louder is better... and smarter."

"Team members speak only from their functional expertise."


These are some of the challenges our clients have described to us about their experience leading or participating on an Executive Team (ET). While ET's don't fit the classic profile of a "team" whose members are interdependent, mutually accountable and focused on a common work product, they are responsible for working together to drive their organization's profitability and growth. So why doesn't this critical mission provide enough impetus for effective teamwork?

Simply said, ET's do not see themselves as a team, or see why they need to be a team. We have discovered that Executive Teams reserve very little, if any, time for reflection on their own processes and dynamics as a group, even though these same leaders typically support such initiatives within their divisions. But there is a glaring disconnect -- organizational members do see the ET as a team and usually pay very close attention to the ways their leaders behave. We have frequently heard comments like, "How can they expect us to be a team when they can't agree on anything?" Like it or not, Executive Teams are held up as a model for team behavior.

An important first step in addressing the disconnect is to ensure that everyone around the table understands the ET's work the "what." The focus will of course depend on the organization's mandates and business priorities, but it must be clear, compelling and urgent.

Secondly, and perhaps most overlooked at the Executive level, is the need to develop ways of working together the "how." Our experience confirms the research: the critical capabilities lacking in most ET's are the process skills.

What capabilities are necessary for today's Executive Team?

Here's what we think ET's must do:
• Build on each other's ideas and engage in productive debate that is anchored in the ET's objectives.
• Solve problems together by utilizing the knowledge and resources around the table.
• Make decisions... and make them as efficiently as possible.
• Surface, manage and resolve conflict. As in more traditional teams, taking on conflict productively builds trust among members a fundamental component of high performance at the top levels in the organization.
• Think outside of one's functional expertise. On a day-to-day basis, each functional leader most likely thinks of his/her respective team as "my team." As a member of the ET, each leader must step out of the trenches and take an organizational perspective.
• Run efficient and effective meetings with clear agendas, objectives, deliverables and timelines.

How can executive teams be strengthened?
It starts with the CEO who understands the necessity for his reports to function as a team and then commits the time and necessary resources. He must lead his team through a process of learning and facilitated discussion so they can together develop the "how" capabilities. As consultants who have worked with ET's we have identified three essential and highly impactful methods that, when used simultaneously, will create a powerful synergy for sustainable change.

Team Coaching
The entire ET as a system is the client in team coaching. Executive Team coaching is focused on changing team dynamics regardless of individual differences among members. Consequently, ET coaching as an approach draws from systems analysis or general systems theory much more than from more traditional management and psychological approaches.

During ET coaching sessions, the team works on its usual business and then is coached on its collective process and results. The focus of the team coaching process is on improving operational interfaces among team members rather than on developing members individually. The team coach utilizes "time outs" to share observations and teach techniques that will improve communication, decision making, and conflict management.

Identification of Top Team Development Goals
The purpose of engaging in a team effectiveness assessment is to arrive at the top three team development goals. These goals should address the team's most pressing needs and thereby create focus and urgency. There are always more gap areas to address than is possible and the process of the team deciding on what it needs to do is itself a valuable experience. The criteria for goal prioritization derive from the critical work of the team as well as the stage of team development.

Alignment of Team Goals with Individual Goals
Developing team goals is only half of the equation, though it is common for the process to start and stop there. The next step is for each team member to develop goals that support the top development areas. For example, if a team priority goal is to surface and manage conflict more effectively, each individual must consider, "How will I contribute to achieving the team goal? How must I develop and what must I learn to make this goal a reality?" Each member would then examine his/her conflict management style and set a goal that builds on the strengths of one's approach, while stretching one's comfort zone and identifying behaviors to take on conflict in new, effective ways.

Like many of the high performing teams we've worked with, we believe that Executive Teams must focus on how they do business together. With the CEO in the lead, teams must commit to the process of developing the critical capabilities so they can perform their work at the highest level possible. We believe that if ET's identify their top development goals via an objective assessment, create individual goals that support the team goals and engage in team coaching on a consistent basis, they will be well on their way to high performance.